I’ve already mentioned the HP t5570e and HP t510 thin clients a few times on this site, so they probably don’t require any more introduction. I will however just stress that one of the nice thing they have going for them is that they still have serial and parallel ports.

I’ve already put their parallel port to good use, as it allowed me to re-plug my Flash Advance Linker and also use the wonderful OPL3LPT device (an ‘AdLib’ parallel port FM synthesizer soundcard).

There is one thing I had always wanted to try, though: the parallel port transfer mode of LapLink. I had used LapLink in the early nineties, but only with null modem (serial) cables.

I originally planned to solder a cable, but it ended up not being necessary, as I was able to buy a brand new compatible cable from a seller in Germany.

Surprisingly, there is very little history available online about the DOS versions of LapLink, and I’m not sure when its parallel cable was actually introduced. The “LapLink cable” Wikipedia page mentions 1983, but that seems strange, as LapLink 2.15 from 1987 does not have any way to configure the software for using a parallel port cable. LapLink 3.00 from 1989 does.

For the purpose of this article, I decided to use the latest DOS version available, which appears to be LapLink 5.00, released in 1993. It comes with an improved UI using redefined characters including cute files and folder icons, along with some subtle animations. I’ve been using the standard color theme. 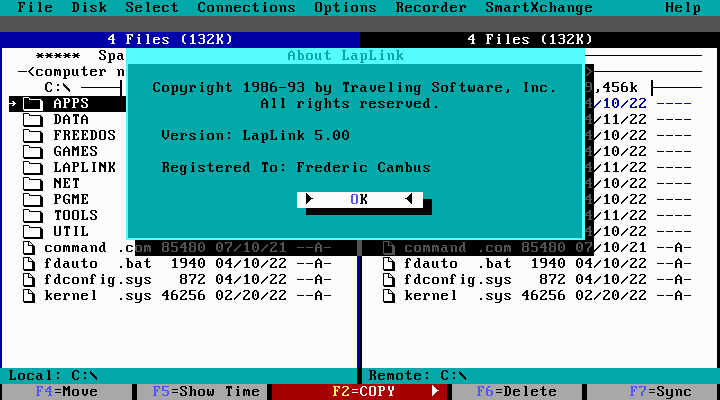 I normally use THEGRAB.EXE which was bundled with TheDraw ANSI editor to capture text screens and save them as ANSI files which I can then archive and convert using Ansilove. However, I ran into some issues and I wanted to enable the redefined characters anyway. I opted to use the excellent Screen Thief program from Villa Software, which I had used in the past to capture some of the screenshots from my demoscene productions.

Below is the main file navigation view:

Notice the small animated arrows along the copy button: the direction changes to show the destination target. In our case, files will be copied from the local machine (on the left) to the remote machine (on the right).

LapLink will even warn you if the clocks are out of sync: 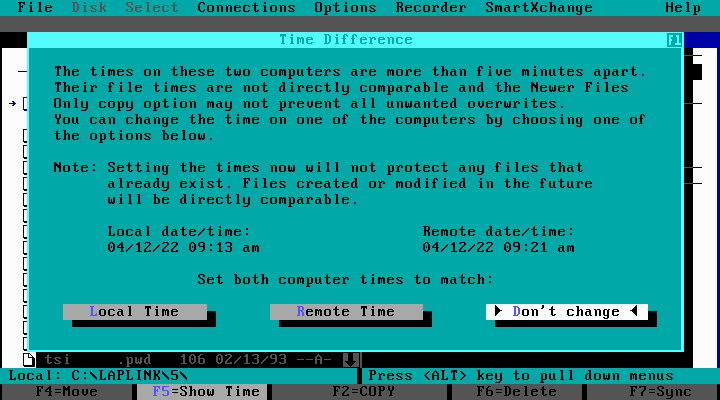 Here is a transfer in action:

The file used is a floppy disk image, and the larger jumps at the end of the transfer is compression taking place.

Below is a large ongoing transfer and its summary: 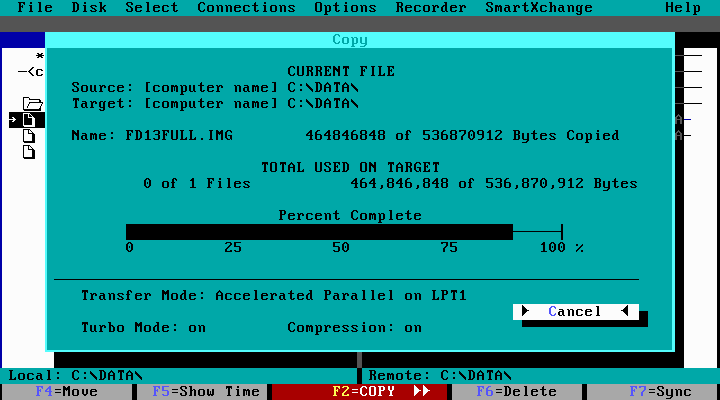 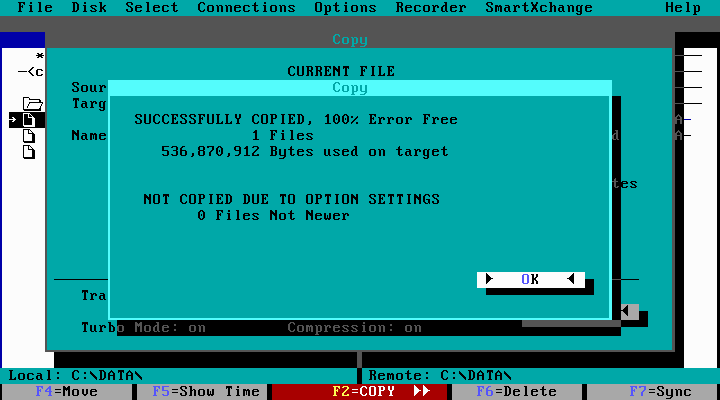 It’s hard to explain, but there is something oddly satisfying in transferring several hundred megabytes ISO images reliably over the parallel port.