In a previous life, I used to draw ASCII art (mostly in the pre-2000 era) and more precisely a type of ASCII art referred as newschool ASCII in the artscene. By taking advantage of the extended character set (the 128 to 255 range) of the IBM PC’s code page 437, it was possible to achieve great detail and really smooth curves. Some examples can be found at the bottom of my online gallery.

Attempting to draw the NetBSD flag in ASCII and use it when booting in both NetBSD/i386 and NetBSD/amd64 in BIOS mode was thus too tempting, so here we go.

The NetBSD flag in full glory, loaded in TheDraw: 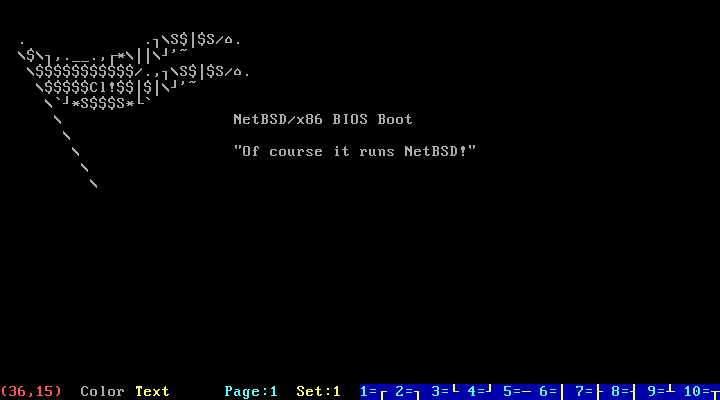 And here is a screenshot of the NetBSD x86 bootloader:

And this is how it could look like with colors and a customized VGA palette:

Unfortunately, the extended ASCII characters do not display correctly when booting in EFI mode, at least on the machine I tested on, but I suspect it will likely be the case on other implementations as well.

As specified in the Human Interface Infrastructure part (33.2.7.2 subsection) of the UEFI specification, UEFI requires platform support of a font containing the basic Latin character set. So extended ASCII support is not mandatory, and there is no guarantee that the characters would be the same between fonts used by different EFI firmwares anyway.

The boot.cfg configuration file can be downloaded here. Enjoy!